Abhishek
@AbhishBanerj
an hour ago
1 year ago, Andy Mukherjee had written a column titled "why I am losing hope in India" and got some kind of award for it He is back with column on how Atmanirbhar Bharat can hurt India Being completely wrong on India's economy the last time has not affected his career one bit
20
120
427
Abhishek Retweeted

Man Aman Singh Chhina
@manaman_chhina
a day ago
You achieve academically brilliance consistently in life, study hours on end to clear the UPSC exam and then end up at the wrong end of a politician who may not be one tenth of what you are.
13
151
837

Abhishek
@AbhishBanerj
3 hours ago
Kerala CM Pinarayi Vijayan has left for USA for medical check up Kerala residents left behind to enjoy the state's No. 1 ranked healthcare system Kerala taxpayers will also be paying all the expenses for Pinarayi's US visit
11
145
471

Abhishek
@AbhishBanerj
5 hours ago
For last 2 days, liberals trending "Say no to Sanskrit" Only advocates of ignorance would call for shunning of India's cultural treasures Liberals will cry for some Tanishq ad, but will demand that we say no to Ramayana, Mahabharata, Vedas! What kind of society do they want?
26
151
509

Abhishek
@AbhishBanerj
7 hours ago
Would u believe? BJP has 26 MLAs in Jharkhand(total 81 seats) But BJP not given Leader of Opposition Speaker decision still "pending" Congress which wanted LoP in Lok Sabha with 44/543 wont give LoP to BJP with 26/81 Now democracy not in danger bec Cong has liberal privilege
42
1K
3K

Abhishek
@AbhishBanerj
18 hours ago
I say heartbreaking because this adorable couple were some of my fav people on the internet See this old video, for eg. But hey, the PBS logo was always there. The liberals had to get their money's worth sometime...

How Eating Out Keeps You Poor!

SUPPORT us on PATREON: https://www.patreon.com/twocentspbsdsSUBSCRIBE to Two Cents! https://goo.gl/jQ857HRestaurants are getting more and more expensive, yet...

Abhishek
@AbhishBanerj
18 hours ago
Heartbreaking to see the level of liberal propaganda One of my fav Youtube channels was "Two cents" who would talk about money Well they just did a video on why nobody should blame Biden for runaway inflation The channel is funded by PBS and PBS gets money from US govt. Sigh.
5
42
220
Abhishek Retweeted

Ajit Datta
@ajitdatta
19 hours ago
I mean you're only talking of a person who led student movements as a teenager, who became a minister in his early 30s, who transformed the entire healthcare, education and infrastructure of a state, who can literally win any election and form any government in 7 states, so sure.

Man Aman Singh Chhina
@manaman_chhina
a day ago
You achieve academically brilliance consistently in life, study hours on end to clear the UPSC exam and then end up at the wrong end of a politician who may not be one tenth of what you are.
8
73
431

Abhishek
@AbhishBanerj
19 hours ago
Not to disrespect anyone, but effort needed to clear UPSC is not even 1/100th of what it takes become a successful politician Media should look within. Remember the NDTV journo screaming at ISRO scientist? THAT is an example of someone brilliant being humiliated by a nobody.

Man Aman Singh Chhina
@manaman_chhina
a day ago
You achieve academically brilliance consistently in life, study hours on end to clear the UPSC exam and then end up at the wrong end of a politician who may not be one tenth of what you are.
24
257
907

Abhishek
@AbhishBanerj
22 hours ago
In 1985,the CIA flew many Mujahiddeen from Afghanistan to US for treatment A tribal chief brought his wife for a medical checkup because she wasnt getting pregnant Turned out problem was his own low sperm count When informed, the man took out a knife and tried to stab everyone
15
147
607

Abhishek
@AbhishBanerj
a day ago
All this leaves BJP as practically the only game in town when it comes to Goa. If AAP keeps consolidating the opposition vote share, I genuinely feel there is a chance they might go past the BJP by voting day.

I know what you must be thinking. Why not Uttar Pradesh? Well, that’s because I need more time to collect my thoughts on UP. A lot is happening, and it is difficult to keep track. So, in orde…

Abhishek
@AbhishBanerj
a day ago
Last year, Raghuram Rajan had predicted Indian economy would not recover to pre-Covid level before late 2022 We did it 1 year in advance But Raghuram Rajan has no shame, and no desire to own up to failures He is back on Economic Times, lecturing and mocking India's economy
226
2K
7K

Abhishek
@AbhishBanerj
a day ago
PM Modi has decided that Republic Day celebrations will now begin from Jan 23 to honor Netaji's birthday Something that no Congress govt ever imagined Meanwhile, Mamata Banerjee is busy telling people that BJP is "anti-Bengali" and BJP workers in Bengal are outsiders.
6
165
633

Abhishek
@AbhishBanerj
a day ago
A man as successful as Virat Kohli has retired. A loser like Rahul Gandhi insists he is still in the game.
40
139
1K
Abhishek Retweeted

Keya Ghosh
@keyakahe
a day ago
This is hilarious : TMC Minister of Minority Affairs & Madrasah education has invited Elon Musk to do business in West Bengal. Says Bengal has the best infrastructure & Bengal govt has the best vision. 🤣🤣 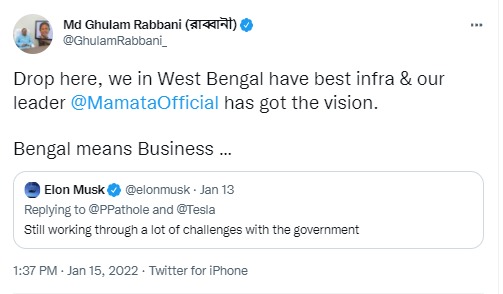 Citti Media
@CittiMedia
a day ago
"The media heavily underplays the BJP & overplays caste; people are wise & know who to vote for." The 2022 UP election Vaishali Dialogue ft. @shantanug_ , @TrulyMonica & @AbhishBanerj is live now: Follow us | | #BJP @sharansetty2 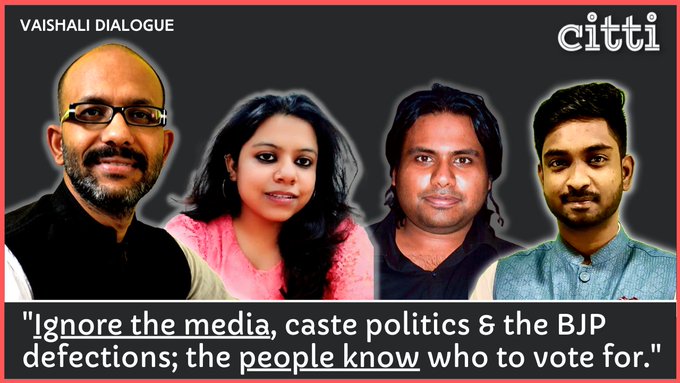